The traces of Rome in Cantabria

It is important to know our past in order to understand our future. That is why today we would like to show you a very important part of our region’s past that has been well preserved in our region: the traces of Rome in Cantabria. We have designed a route through some of the most important archaeological sites from this period in the region so that you can see them with your own eyes. Would you like to come along?

This route takes us to a total of six sites: two in Campoo, the Roman city of Julióbriga and the Cantabrian-Roman archaeological site of Camesa-Rebolledo; one site in Upper Besaya, the Roman road leading from Pesquera to Bárcena de Pie de Concha; another site in Camargo, where we will visit the thermal baths and the mediaeval necropolis of San Juan de Maliaño; one in Castro Urdiales, Flavióbriga and one in Santander, the MUPAC.

We will start our route with a visit to the “remains in situ”, that is, the traces we can walk through and feel what life was like more than 20 centuries ago. Our first stop, probably best known to the general public and one of the best-preserved, is the Roman city of Julióbriga. Located on a hill very close to the village of Retortillo, near Reinosa —the capital of Campoo— it was a civil city that ruled over a large area. There are interesting archaeological remains there, such as the town’s Roman forum. 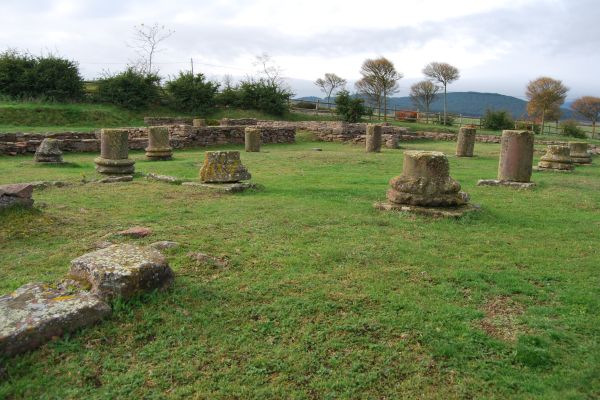 You can also visit the Domus Romana Museum, which has recreated an authentic Roman domus, the Casa de los Morillos, of an upper-middle-class family, with a permanent exhibition where visitors can learn about the main rooms and the most important aspects of the inhabitants’ daily lives.

We continue to the Campurria region, to the Cantabrian-Roman archaeological site of Camesa-Rebolledo. This site is of great interest because it preserves the archaeological remains of an ancient Roman villa from the 1st to 3rd centuries AD, with thermal bath, wall paintings and the Visigothic and mediaeval necropolis. During the tour you will feel like a real archaeologist. With the help of the guide, you will see the layout of the Roman villa, its baths and wall paintings, as well as the Visigothic necropolis (6th and 7th centuries) and the mediaeval necropolis (8th and 12th centuries) located above the villa.

We’ve arrived at the Besaya region, where we’ll find a hiking trail that’s ideal for taking in the natural beauty and history of our region at any time of year. But this is not just any route; it runs along a Roman road between the municipalities of Pesquera and Bárcena de Pie de Concha. It is thought that the Romans built this road to be used by the Roman army during the Cantabrian Wars, which took place between 29 and 19 BC. This excursion is ideal for the whole family, as it takes between 2 and 3 hours. The total ascent is about 400 metres with a maximum gradient of 10%. During the autumn months, it is an excellent spot for gathering chestnuts.

We now head towards the coast, where we begin our journey in Castro Urdiales. This magnificent coastal town contains the remains of Flavióbriga, which at the time was one of the most important ports on the maritime trade route between northern Spain and France and was also the only known Roman colony on the entire Cantabrian coast. It was founded in the 1st century AD, possibly by Emperor Titus Flavius Vespasianus, although its origins go back to the pre-Roman settlement of Portus Amanum or Samanum. Archaeological excavations have documented an important population centre with some public buildings, such as the baths, and private buildings from the colonial period (late 100 AD, early 200 AD) and lower imperial structures from the 3rd and early 4th centuries AD. Archaeologists also discovered the old orthogonal layout of the colony, with certain fragments of streets. 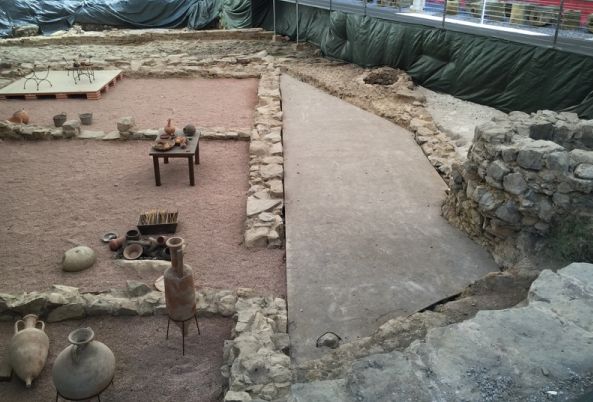 The next stop is Maliaño, where we find Roman baths and a mediaeval necropolis. We reach this site when approaching Santander from Castro Urdiales, directly opposite the airfield of the Cantabrian capital, in the grounds of the Maliaño cemetery. It consists of two main parts, an older one that belonged to a Roman baths building that was quite important because of its size, and another one that is still unknown, since only the atrium of a domus could be excavated because of the site’s location within the cemetery.

We end this tour at MUPAC, the Museum of Prehistory and Archaeology of Cantabria, the perfect place to learn more about the traces of the Romans in Cantabria. This exhibition centre in Santander houses the material remains of well-known archaeological sites, including some of those mentioned in this article. The cultural artefacts that have been kept here since the end of the 19th century are very important. They show how people lived from the beginning of prehistory to the Middle Ages. It is the perfect place, once we have retraced the steps of the Romans Cantabria, to learn more about the when and where of each of the sites we have visited on this route in greater depth.

Would you like to learn about Roman traces in Cantabria? Did you know any of the places we have mentioned? Would you like to visit any of them? When you do so, let us know using our Cantabria Infinita social media profiles on Facebook, Twitter and Instagram with the hastag #ComparteCantabria. This autumn, discover our past and come and enjoy yourself in Cantabria, more to discover.